Verkada’s Early Team Members Explain the Vision that Launched the Company — and Where They’re Going Next
Christine Dzou Aug 23, 2019 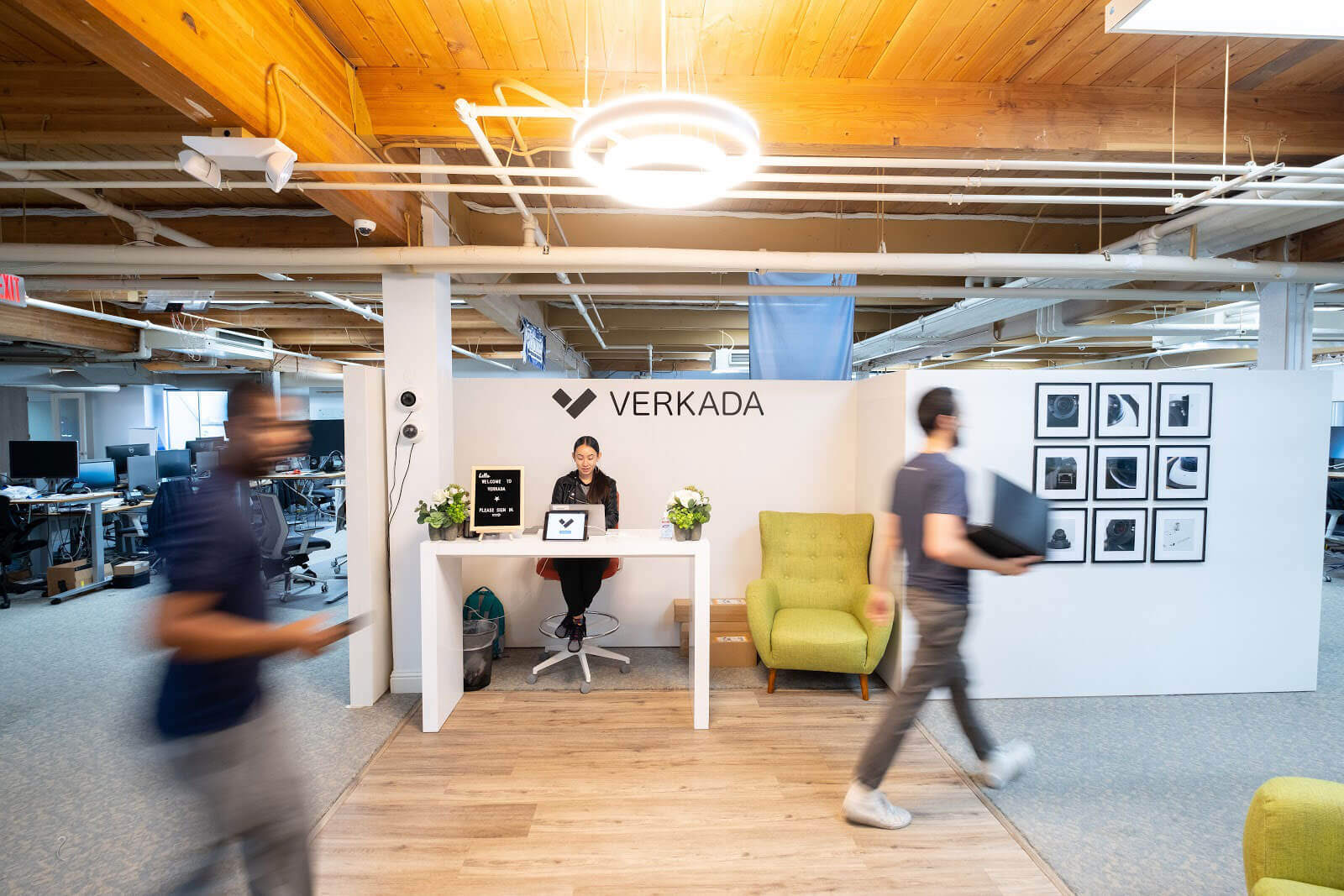 When Verkada launched three years ago, consumer security solutions were beginning to boom — but enterprise customers weren’t as lucky. The company’s founders and earliest team members set out to change the way businesses think about security in the real, physical world, and today, Verkada is rapidly gaining ground in a $20B market. Below, Filip Kaliszan (Co-Founder and CEO), John Russell (VP of Design), and Raj Misra (Director of Hardware Engineering) explain their team’s customer-first approach to solving problems that have plagued the industry for decades — and share their excitement about Verkada’s next frontier.

First, give us Verkada’s origin story.

Filip: Before Verkada, two of my co-founders, James and Benjamin, and I had a startup called CourseRank. It started out as a class project, and through a series of happy coincidences we grew  it into a successful business. But we knew the next time, we’d have to be much more deliberate. 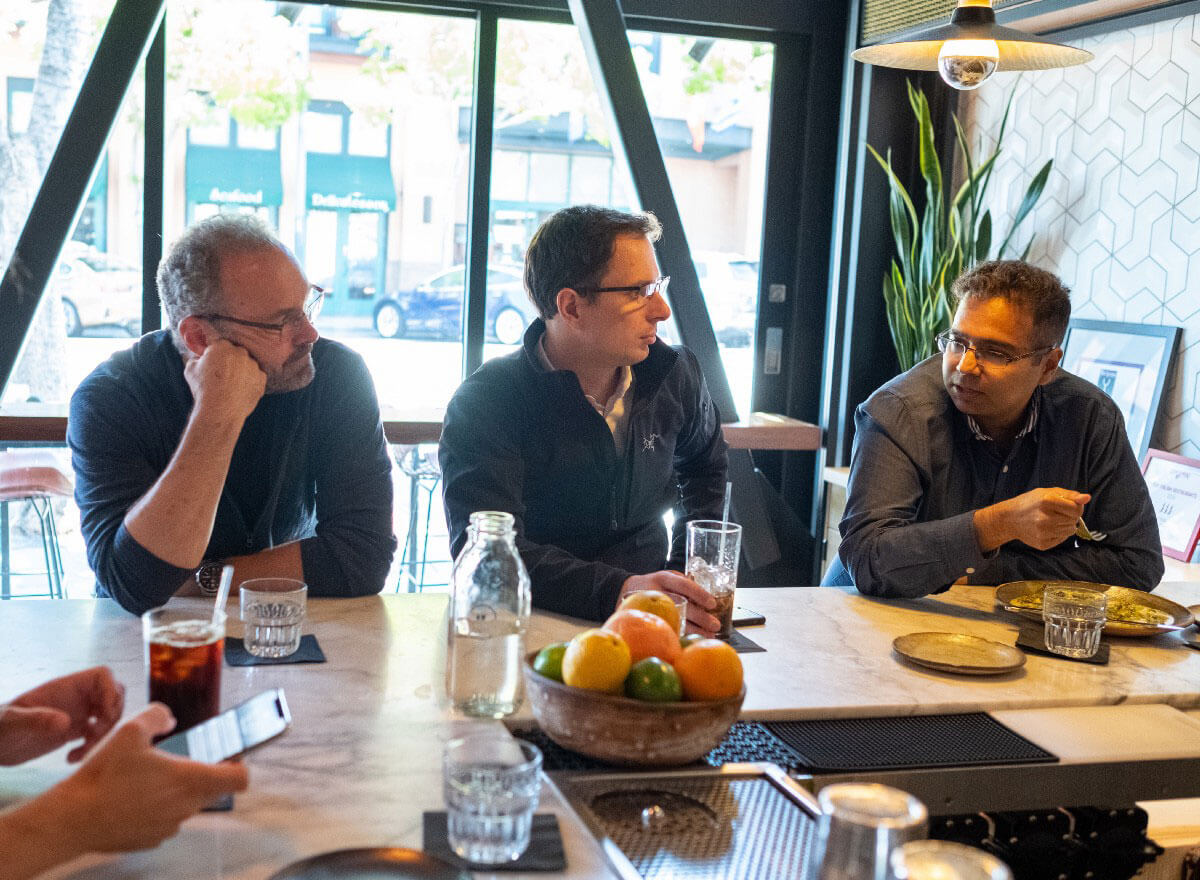 From left to right: John, Filip, and Raj step out for lunch in San Mateo.

So when we started exploring ideas for another company, we decided it had to have two things — interesting technical problems to solve and a market where we could have a meaningful impact. Enterprise video security fit the bill. I’d installed an enterprise camera at my house years earlier, before the consumer companies were making outdoor-friendly models, and I’d seen firsthand that there was plenty of room for improvement.

“We found product-market fit in our first iteration, and in the last year or so we’ve gone from hundreds of cameras to tens of thousands.” — Filip

Our fourth co-founder, Hans Robertson, who had previously co-founded Meraki, had also been thinking about cameras, so together we started studying the space more closely, talking with dozens of potential customers and partners. We wanted to confirm it was a real opportunity. The first few months were brutal — we had a hard time both hiring and finding investors — and it can be difficult during times like that to know how much you should persist. A lot of startups fail because the founders give up too soon. But you also don’t want to blindly keep building something that isn’t going to work.

We had the endurance to push through because we’d convinced ourselves the idea could work, and lo and behold, it did. We found product-market fit in our first iteration, and in the last year or so we’ve gone from hundreds of cameras to tens of thousands.

“The reason I joined Verkada was the team. Products and business plans change over time, but what matters most is the people you work with.” — Raj (photo right). Photo left: John chats with Scott Steber, Product Design Mechanical Engineer (seated).

John and Raj, you were among the first employees. Why did you join?

John: I’d worked with Filip, Benjamin, and James at Chegg, which acquired CourseRank, and I really enjoyed it. But when Filip called and explained they were working on security cameras, my first reaction was, “No thanks.” Lucky for me he kept talking, because once he explained the product concept and the state of the market, I was thinking, “Why is no one else doing this?” I was in.

The other factor was that I’d done enterprise before — and hated it. Customers often don’t have much choice about what to buy, so a lot of companies do the bare minimum and aren’t remotely focused on the users. As someone who really cares about making things for actual people, that was a miserable experience for me. But it also made me realize what an advantage it would be if an enterprise company could deliver a consumer-level experience — and I knew that’s what Filip, Benjamin, and James would do. They are people who sweat the details and take pride in their craft. I was certain they’d put the customer first and make something we could be proud of.

“Once Filip explained the product concept and the state of the market, I was thinking, ‘Why is no one else doing this?’ I was in.” — John

Raj: And taking that approach is a great competitive advantage in the B2B space — because compared to consumer products, there’s not nearly as much psychology behind what enterprise customers do and don’t buy. They have very specific business needs. The goal is simply to meet those needs better than anyone else.

Fundamentally, the reason I joined Verkada was the team. Products and business plans change over time, but what matters most is the people you work with. I knew Hans from my previous job, and I had a good feeling after meeting the rest of the founders. I liked the vision and the fact that they’d “been there and done that,” being acquired by Chegg and going through an IPO. They clearly knew how to weather the ups and downs of growing a business. 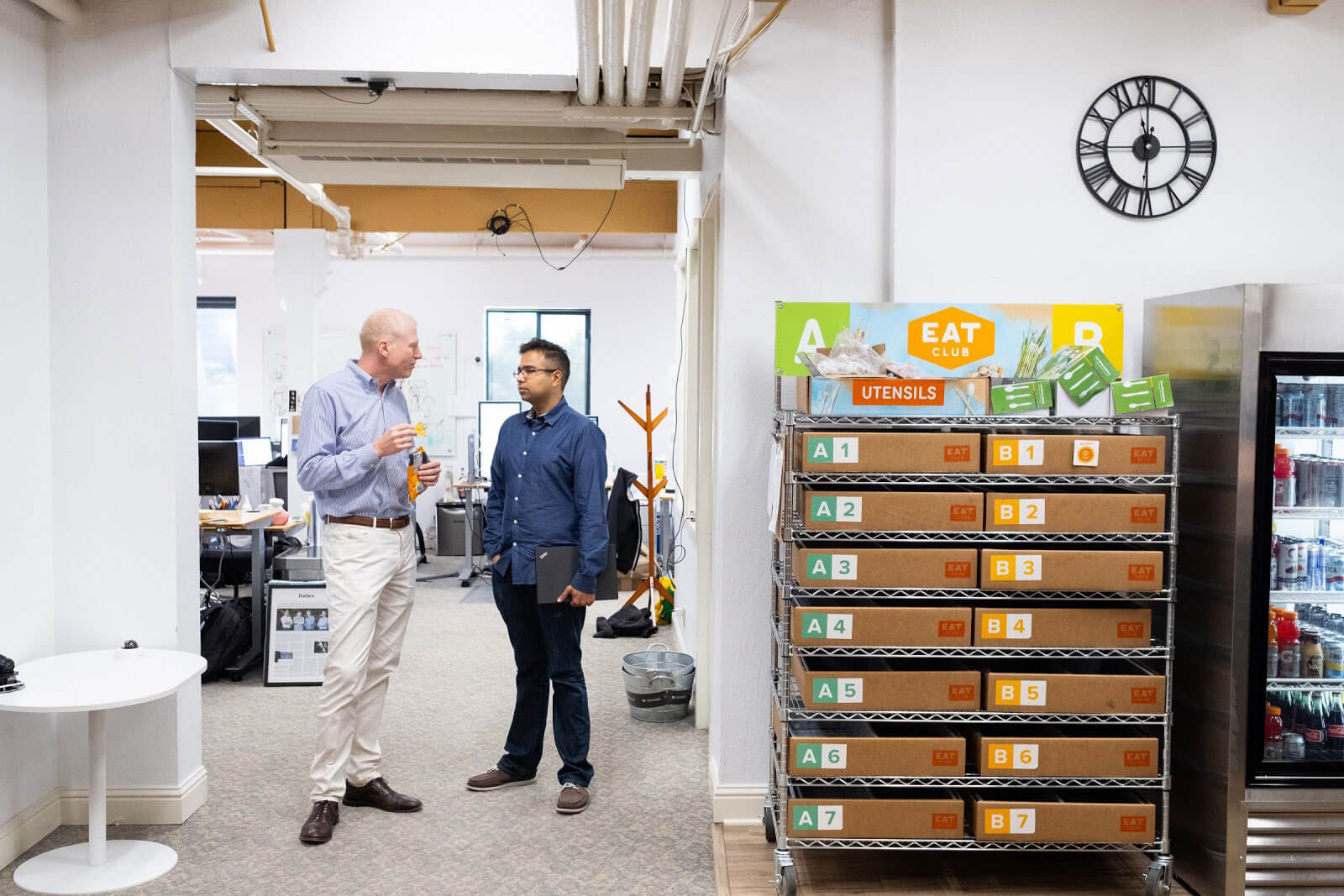 Verkada cofounder Hans Robertson and Raj catch a moment off the kitchen where catered lunch is served twice a week.

Filip: As John mentioned, it all starts with the customers. The industry has very established ideas about how video security works, but we’re not super interested in how the rest of the industry does it. We’ve studied that, but what we’re really studying are the problems our customers have, so we can design a product that will solve those problems. We’re starting from first principles and rethinking from the ground up.

John: In the first year, we spent a lot of time on-site and did all our own installs, so we could really get in touch with the people we were building for — how they’re going to use the cameras, where and how they’d be installed. Customer-centric design is about a whole host of tiny things; it’s software that’s easy to use and that works on the devices people actually have. It’s giving people a simple way to share a video feed via text message. It’s the kind of thinking that just doesn’t exist elsewhere in the market. Companies are used to all these complex systems where it’s a struggle to get people to use them and you’re paying for a bunch of training. When they see Verkada, it blows their minds.

“The industry has very established ideas about how video security works, but we’re not super interested in how the rest of the industry does it.” — Filip

Filip: We also believe in shortening our iteration cycles as much as possible, because you can’t build a perfect solution in a vacuum. Our competitors might release a firmware upgrade once a year if ever; we’re doing it almost daily. If code is written, it ships. That helps us learn quickly how features are being used, and what is and isn’t working for our customers. 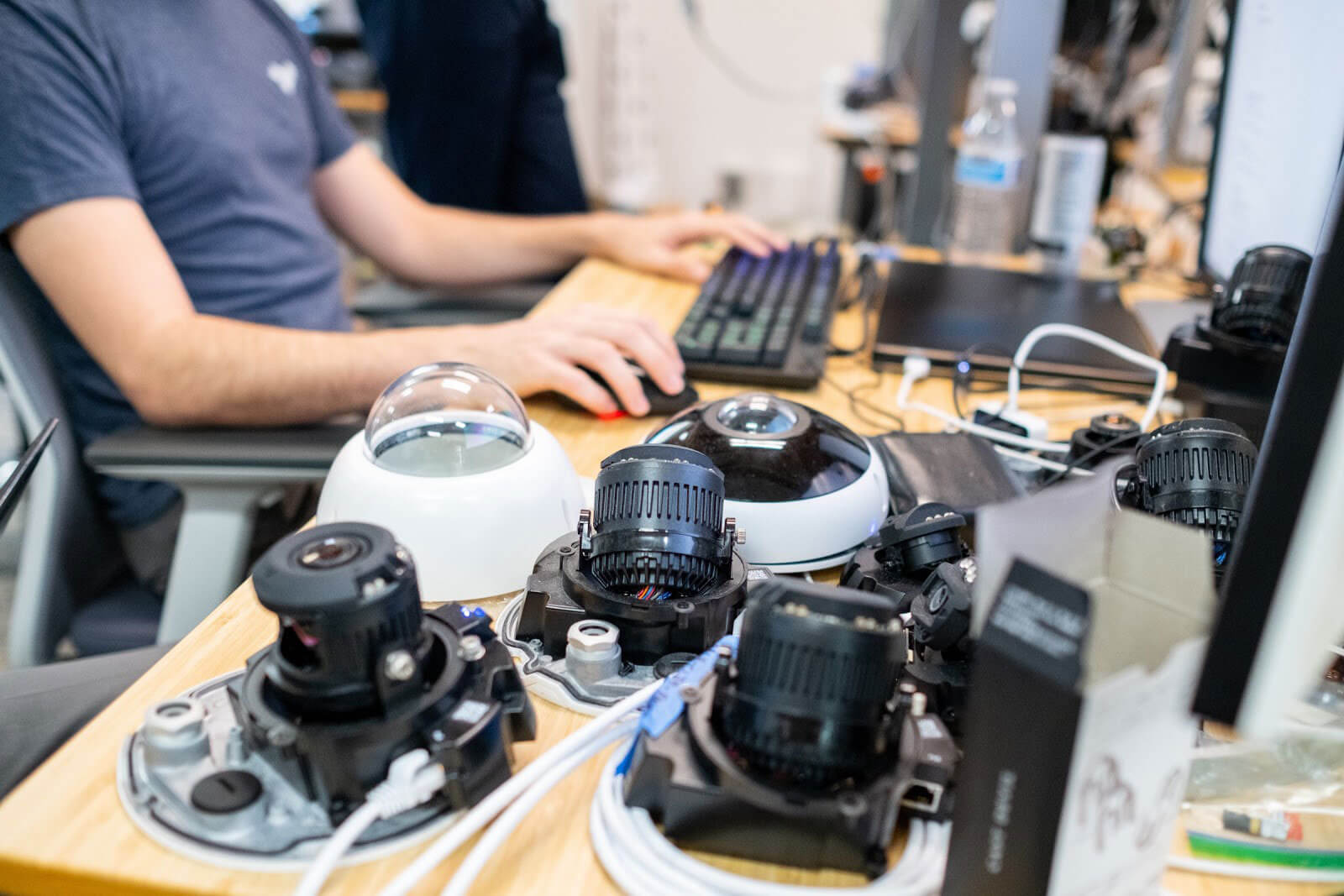 “Customer-centric design is about a whole host of tiny things; it’s software that’s easy to use and that works on the devices people actually have. It’s giving people a simple way to share a video feed via text message. It’s the kind of thinking that just doesn’t exist elsewhere in the market.” — John

Left: Members of the Engineering team enjoy lunch on Verkada’s wraparound outdoor patio while Verkada products watch over downtown San Mateo below. Right: Back in the office, prototypes abound.

How do you think about the ethics of surveillance?

Filip: We’re constantly talking about privacy and cyber security — in fact, that’s part of why we’ve been so successful. For example, health care is an emerging segment for us because we are conscious enough about privacy to be compliant with HIPAA. Some of the fastest-growing camera and sensor makers in the world are taking a very different approach: “I made a camera that records the world, now you go figure out how to use it.” We come in and say, “Here’s a Verkada camera that’s already secure out of the box.” We’re seeing more efforts to regulate how surveillance systems are used, and that’s a good thing for the world. And frankly, it’s a good thing for Verkada, too — because we’re equipped to work within those requirements.

What are you excited to do next?

John: I think one of the biggest challenges going forward will be to retain what’s made this place so successful — our culture. I’m excited to be designing not just a product, but a whole organization.

Filip: We scaled from 10 to 150 people in about 18 months, so there are a lot of teams at Verkada that didn’t even exist a year ago. As we build up those new functions, we’re being very careful about how we train new team members and how we evolve as a group. We want to make sure we’re growing efficiently but still maintaining our core values.

From a business perspective, our goal is to continue expanding beyond cameras and be known as a great tech company — to enhance not just safety, but overall efficiency in modern buildings and spaces. There are so many enterprise companies focusing on things like making sales more efficient, but we want to bring that same kind of innovation to the physical spaces where we all spend our lives.

“Our goal is to continue expanding beyond cameras and be known as a great tech company , enhancing not just safety, but overall efficiency in modern buildings and spaces.” — Filip

Raj: The possibilities are endless in terms of new features and functions that can help our customers. A camera has a lens, but it also has a CPU that can take data from other inputs. We have one product line that’s at a good level of maturity, and we’re going to keep making that awesome, but we’re also going to launch new ones.

Filip: Five years from now, we want it to be a no-brainer to run your building on our systems. We like to say that if James Bond or Tony Stark were buying a system for their new headquarters, they’d want it to be Verkada. 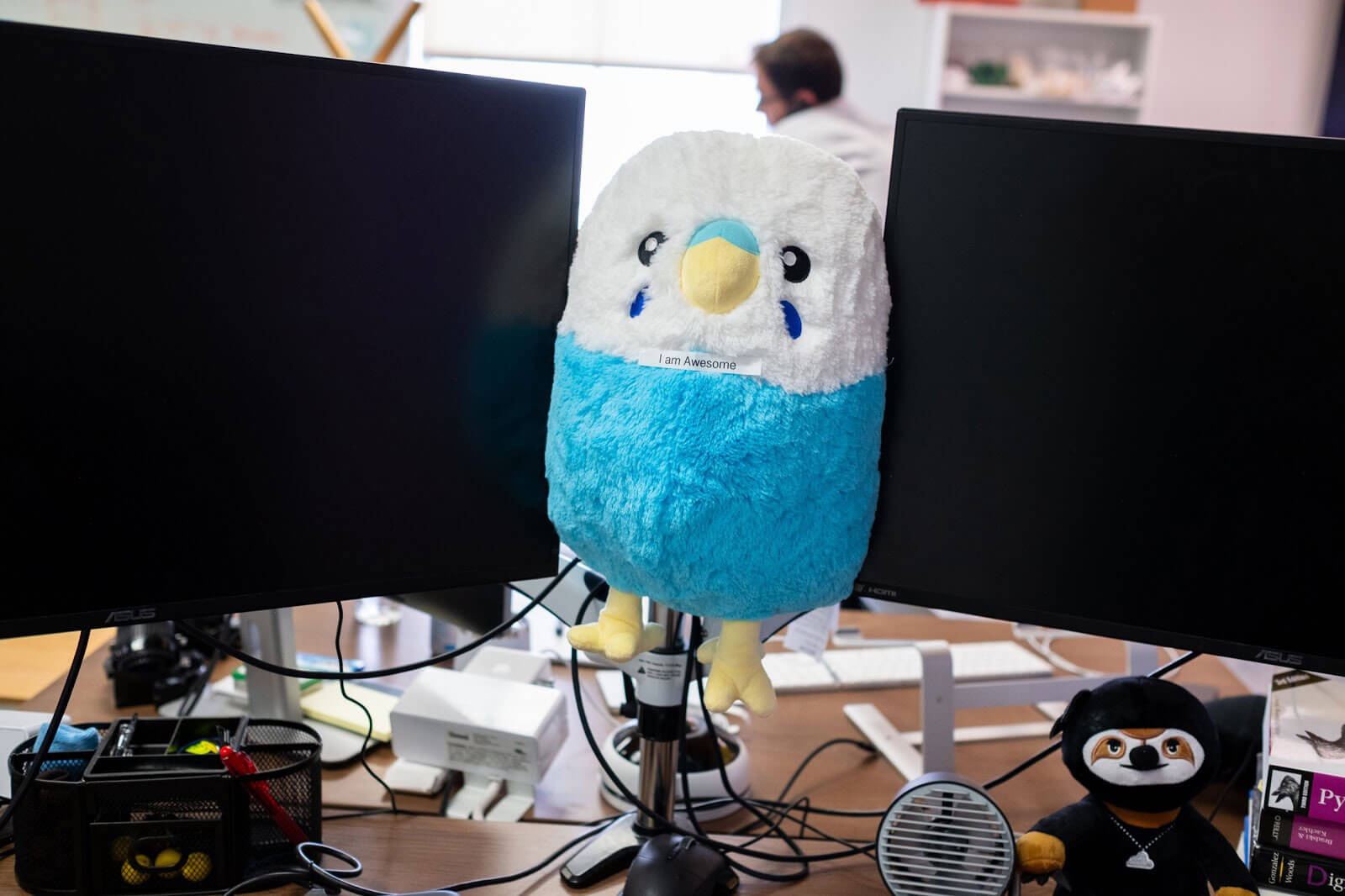 Your moment of Zen: A little confidence never hurts.

At Verkada, great UX is a core value. As they prepare to ship a new customer-centric security camera, we asked some of our Hardware and Software engineers to reflect on how their teams take quality to the next level.

Software engineer Grace Wang moved west from Chicago to join the Verkada team. Read about her role focusing on computer vision and what she most appreciates about Verkada’s Eng culture.