Understanding Your Options for Extended Video Storage: Local vs. Cloud vs. Hybrid Cloud

Video cameras come in many shapes and formats, but one common fact unites them all—the amount of data they record and transmit. There are multiple means of storing and accessing this data, both locally on-premise and remotely in the cloud. Many industry leaders are forced to make cost and quality trade-offs when it comes to maximizing storage capacity on their cloud or local video recorders. Verkada’s hybrid cloud storage model eliminates many of these limitations, allowing users to maintain the complete coverage that they need.

In this blog, we’ll explore the strengths and weaknesses of on-premise and cloud video storage, as well as how Verkada’s hybrid approach combines the benefits of both for a predictable and consistent price.

Most NVRs store their footage on a group of hard disk drives (HDDs). If your organization relies on NVR storage, you may be interested in learning about the common myths and misconceptions many users have about their strengths and limitations.

1) Reliability: According to a Backblaze study of over 25,000 HDDs running constantly for several years, hard drive failure occurs in three separate ‘stages.’ After a year and a half of use, 5% of drives suffered from mechanical failure. For the next 18 months, this metric dropped to around 1.5%. However, after the third year of use, an astonishing 12% of hard drives failed per year.

That means any legacy NVR system that has been running for six years likely has around half of its drives non-functioning and in need of replacement. 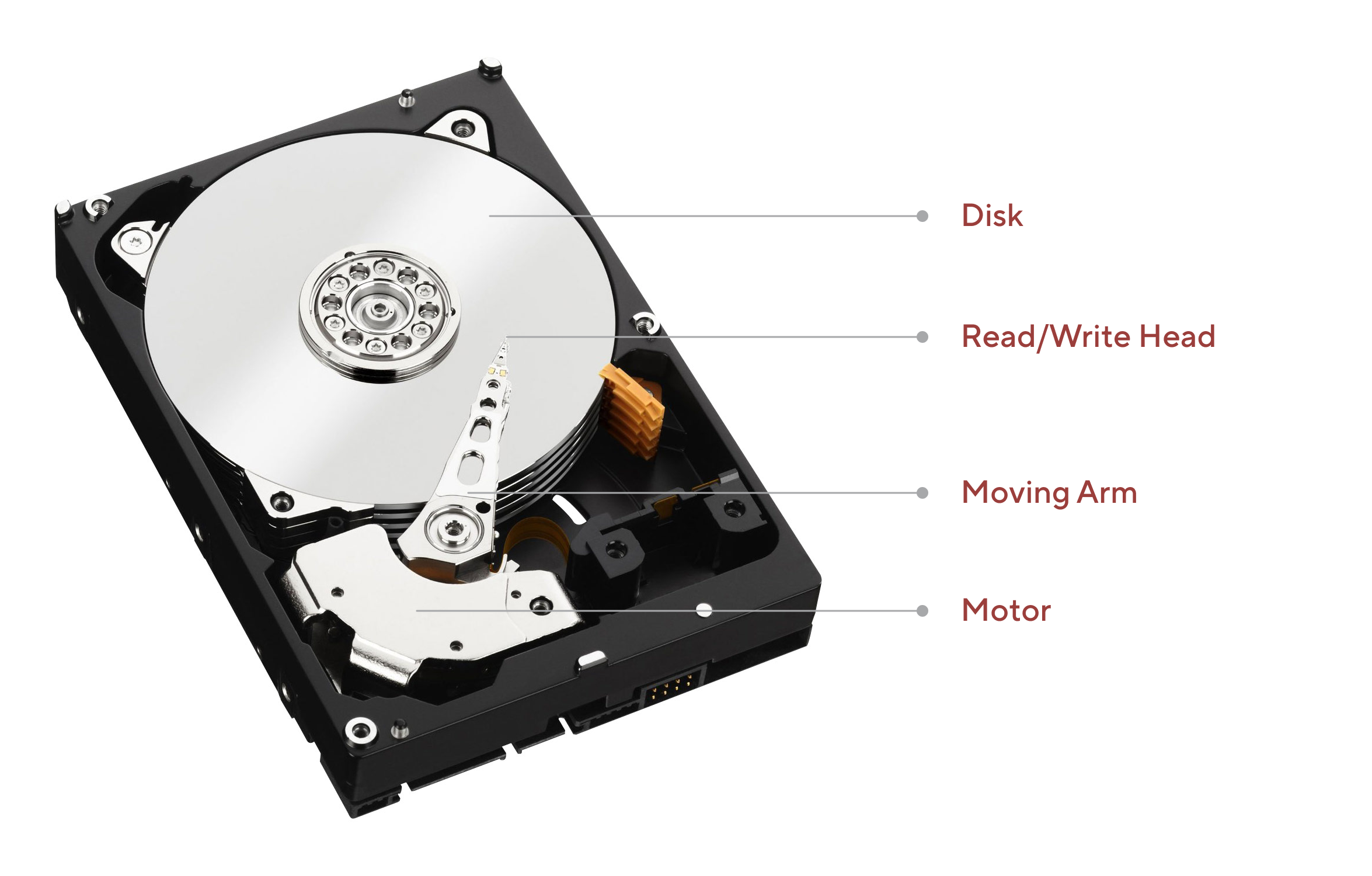 Above is an image of the inside of a standard hard drive. Small motors spin the disk (or platter) and move the arm so that the read/write needle head can make changes to data anywhere on the disk. These motors frequently burn out and stop functioning after constant and prolonged use. The read/write head is also vulnerable to mechanical failure, ‘floating’ only a few molecules over the disk itself. If the hard drive is tilted or jostled, the head and the disk might touch, causing irreparable damage to both components.

Data from a drive that has failed is in most cases irrecoverable, especially if the internal disk has been damaged. This poses a significant issue for organizations that are required by law or policy to retain video for a defined period of time. Hard drive failure-induced footage loss might result in punitive action or fines.

2) Limited Storage: The other issue that many NVR users struggle with is that of limited storage capacity on the devices themselves. NVRs and the hard drives they depend on have a finite amount of space that frequently forces organizations to make sacrifices in the performance and quality of their surveillance solutions. These sacrifices take various shapes and forms:

Cloud-connected cameras solve many of the issues noted in the above section. For example, digital storage on the cloud is effectively limitless, solving the issues caused by finite NVR storage. Similarly, cloud storage is almost always backed up redundantly across multiple servers, meaning that even in the rare case of cloud drive failure, footage will be safely stored in two or three different locations. That said, cloud cameras feature some unique problems related to their constant dependence on remote storage. These problems can be organized into three groups.

1) Bandwidth Usage: Because these cameras stream footage continuously to the cloud, they consume a constant and sizable amount of bandwidth whenever they are active. The consequence of this constant traffic may be felt by all users who share the network, especially if cloud cameras are deployed at scale. The inadvertent result of excessive bandwidth consumption is often slower network speeds, lapses in network service, or even overage costs with unpredictable costs.

This is an example of a network that has hit its bandwidth cap of 20Mbps . From around 5:15 onwards, users would experience slow network speeds, increased packet loss, and even dropped connections.

When experiencing network overage, administrators are faced with a lose-lose scenario: either throttle network traffic which will impact the performance of both cameras and users, or purchase more bandwidth which may be impossible due to budgetary constraints.

2) Cloud Storage Costs: While cloud cameras are freed from the space limitations of unreliable and finite NVR hard drives, cloud storage is not a perfect solution to the problem. While the cloud is effectively without an end to its video storage capacity, every additional gigabyte of storage used incurs additional fees. A standard camera streaming in HD quality for 12 hours per day requires over 2.5 TiB of storage per month, resulting in AWS S3 fees that total over $700 per camera per year. Especially with large camera installations, these types of storage models can become expensive very quickly. As a result, many security stakeholders make sacrifices to their cameras’ performance in order to keep costs from growing exponentially. In effect, while the cloud theoretically offers the potential of infinite footage storage, administrators with budgetary restrictions are forced to make the same concessions to video quality and uptime as if they had an NVR with limited HDD space.

3) Network Outages: Because cloud cameras immediately back up all footage to remote storage, they are completely dependent on proper network functionality. Any intermittent interruption to the network means that footage will not be backed up. If the cameras do not have access to local storage in this case, footage will be permanently lost. Lost footage might result in a dangerous lapse in compliance or an incident which is impossible to resolve.

Verkada has implemented a hybrid solution that solves the major drawbacks of both closed-circuit NVR systems and cloud-connected cameras. Hybrid cloud architecture combines the reliability of local video memory with the limitless computing and storage potential of the cloud. The product of this novel combination is a video security platform that is dependable, resource-lean, and simple for the end-user to employ.

1) Reliability: Because Verkada cameras feature built in high capacity solid-state drives (SSDs), storage is more reliable than that of legacy NVR solutions which use mechanical hard drives. Modern SSDs have been proven to be fail-proof up to 300 TB of writing, depending on type and frequency of usage . In addition, configurable cloud backup ensures that when data is not stored locally, it is being protected by AWS’s trusted servers. Reliability is one of AWS’s five pillars of the Well Architected Framework , ensuring that data resiliency is integral to the ongoing operation of their cloud services. Read more about AWS’s Reliability here .

2) Security: As soon as Verkada cameras are installed, they are protected by our industry-leading cybersecurity protocols, including multiple factors of authentication and end-to-end encryption. These protections make Verkada products perfect for regulated industries, especially those who must comply with rules such as PCI and HIPAA which require strict data protection protocols for footage. Unlike traditional CCTV systems, which are frequently plagued by unaddressed security vulnerabilities for months or years, Verkada devices are protected by an entire team of security experts and penetration testers who seek out and patch vulnerabilities before they ever affect users.

3) Network Efficiency: Verkada cameras were designed to make as small of an impact as possible on the network performance of the organizations they protect. A typical cloud-connected camera uses about 1 Mbps when recording HD footage. In contrast, when in their default recording mode, Verkada cameras only consume a minuscule 20 kbps. This makes them much more practical to deploy at scale without affecting network bandwidth for other users.

The key is Verkada’s unique hybrid cloud architecture. While recording normally in their “steady state” mode, Verkada cameras store footage locally to their specialized solid state drives and only transmit thumbnails and metadata to the cloud. This approach allows users to intelligently and selectively stream only the footage they need. Additionally, for local viewers on the same network, streaming consumes no extra bandwidth- even for multiple simultaneous streams.

While Verkada cameras can locally store up to a 365 days of continuous video, the cloud license offers unlimited archiving in AWS. Because the cameras can continuously store footage during all hours, organizations can set their cameras to perform a backup during off-hours. This enables permanent retention of footage at scale without impacting network performance for other users. 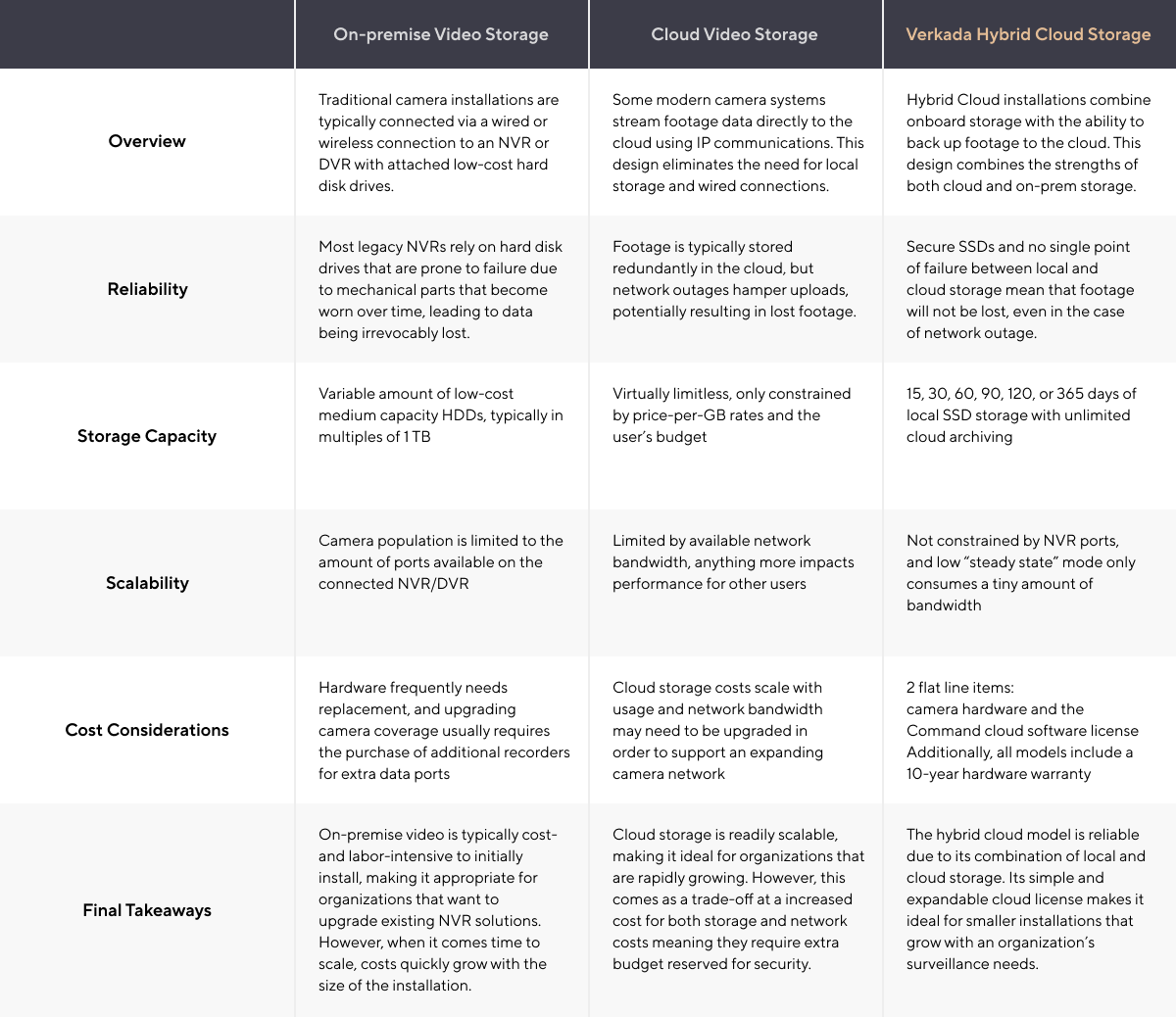 Verkada was featured on 2020 LinkedIn Top Startups, which includes the 50 hottest companies where Americans want to work now.

Announcing Lockdown for Verkada Access Control: Keeping Buildings and Everyone Inside and Out Safe

Learn how Verkada's cloud-based lockdown feature enables teams to respond to incidents in real-time to protect people across your organization.